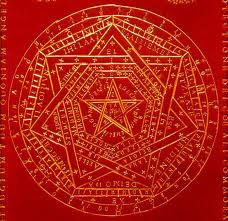 Lets get to the basics of Enochian Magic. Throw away the Golden Dawn and Crowley, and read what Ave says. Ave in my opinion is a masked demon calling himself an angel. Is that not the game a demon would play on man to get his plan accomplished?

Ave states that the watchtowers were placed at the extremities of the world by God, “against the usurping blasphemy, misuse, and stealth of the wicked and great enemy, the Devil.” They act as a limiting influence on the chaotic works of the Devil upon the earth, and are necessary in order to preserve living creatures “within the compass and measure of order.” They do not entirely exclude the influence of Satan, or prevent him from affecting the world, but check and bridle his malice to a degree that allows the orderly fulfillment of the “determinations of God.” When Satan seeks to exceed that limit, the angels of the Watchtowers exert their power, and the Devil “feelith he the bit.”

The Enochian communications teach us that not only must humanity itself initiate the cosmic drama of the apocalypse through the magical formula delivered to John Dee and Edward Kelly more than four centuries ago, but humans must also be the physical actors that bring about the plagues, wars, and famines described with such chilling eloquence in the vision of St. John. We must let the demons of Coronzon into our minds by means of a specific ritual working. They will not find a welcome place there all at once, but will worm their way into our subconscious and make their homes there over a period of years or even decades. In the minds of the individuals that resist this invasion, they will find it difficult to find a foothold, but in the more pliable minds of those who welcome their influence, they will establish themselves readily.

Quoted from page 15 from the pdf:

These very people who swear by the Gospel alone and reject every kind of real spiritual knowledge, form the beginning of a flock for Ahriman when he appears in human shape in modern civilization. From these circles, from these members of confessions and sects
who repulse the concrete knowledge brought by spiritual endeavor, whole hosts will develop as adherents of Ahriman. Now this is all beginning to come into existence. It is there, it is at work in present humanity and one who speaks to men today with the
knowledge of spiritual science speaks into it, no matter whether he is speaking on social or other questions. He knows where the hostile powers lie, that they live supersensibly and that men are their poor misguided victims. This is the call to humanity: “Free
yourselves from all these things that form such a great temptation to contribute to Ahriman’s triumph!”

This should give the final pieces of the puzzle to the Church of Ahriman’s theology. It would be easier to read the Bible of Corruption. One man’s God is another man’s Devil!

This site uses Akismet to reduce spam. Learn how your comment data is processed.